If you haven’t heard, I’m on Snapchat… And I’m kind of obsessed. 🙂 I’ve always wanted to do a day in the life of a twin mom kind of post because I feel like people give me too much credit for what I do. I get a lot of “I don’t know how you do it” kind of comments when I’m out with my brood of little ones. But really, I’m just making it through day by day the same as anyone else.

The only downside to “ a day in the life” kinds of posts is that, even if you crunch it waaaaaayyy down, it’s hard to squeeze your whole day into a single blog post or video.

That’s where Snapchat is pretty handy. Since snaps can only be 10 seconds long, a whole day’s worth only boils down to a 2 or 3 minute video. I like that, and I hope you do too. This Saturday was super mellow because we didn’t have a baseball game, birthday party, or any other responsibilities. It was just us hanging out as a family.

A Day in the Life of a Twin Mom | Snapchat Saturday 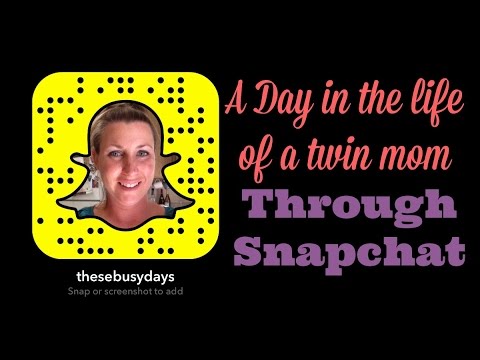 Now for a little commentary on this video: The idea came to me as I was in one room and the kids were in the other. As I listened in on their conversation I just melted at the cuteness going on over there. Like when we were in the fabric store and the girls were going gaga over all the “fluffily” cloth. Or Baby John was singing to himself in his crib at nap time. I really wanted to document those sweet little moments. They’re so fleeting.

I didn’t get a ton of sweet moments in my snaps, unfortunately. And of course every time someone did something absolutely adorable it’s not like you can have them do it again so you can record it. Life isn’t like that. I did, however, get a lot of ‘real life’ in the video. It’s funny because one twin was not having a good day, and she’s usually not such a stinker. But Saturday was not the best representation of my darling Madeline. She refused to go down the stairs or get out of the car and she cried when I gave her ice cream. Of course, today she’s a sweet little thing, totally the opposite from yesterday.

Also, Logan is not represented in this video because he isn’t home until the 5th. He’s been at his dad’s for half the summer, only coming home for a night every now and then. I miss him terribly, and will probably do this again when he can be in the video with us. When Snapchat first debuted I definitely turned my nose up at it because I figured it was just a way for pervs and party kids to share dirty photos without their parents finding out. But I think, like any online tool, it’s going to be as rated-G as you want it to be. You just have to make sure that you’re following people that you can trust not to post things you don’t want to see. If you’re on Snapchat find me at thesebusydays. Don’t worry, you can trust me. 😉